Of all Luxor's many monuments, the Temple Complex of Karnak has to be its most astonishing and beautiful feat. Within its precincts are the Great Temple of Amun, the Temple of Khons, and the Festival Temple of Tuthmosis III, as well as many other buildings. It is not built to a single unified plan but represents the building activity of many successive rulers of Egypt, who vied with one another in adding to and adorning this great national sanctuary, which became the most important of Egypt's temples during the New Kingdom.

All the monuments here are on a gigantic scale, reducing visitors to ant-like proportions as they gaze up at mighty columns and colossal statuary. Even if you're short on time, don't scrimp on your visit here. You need at least three hours to try and make sense of the entire complex. You can easily walk to Karnak from downtown along the Nile-side Corniche road, although due to the heat, most people take a taxi. If you're short on time, plenty of tours are offered that whip you around the highlights of Karnak. A private tour of Luxor East Bank, Karnak, and the Luxor temples is a good option. This half-day tour visits these ancient sites with an Egyptologist. 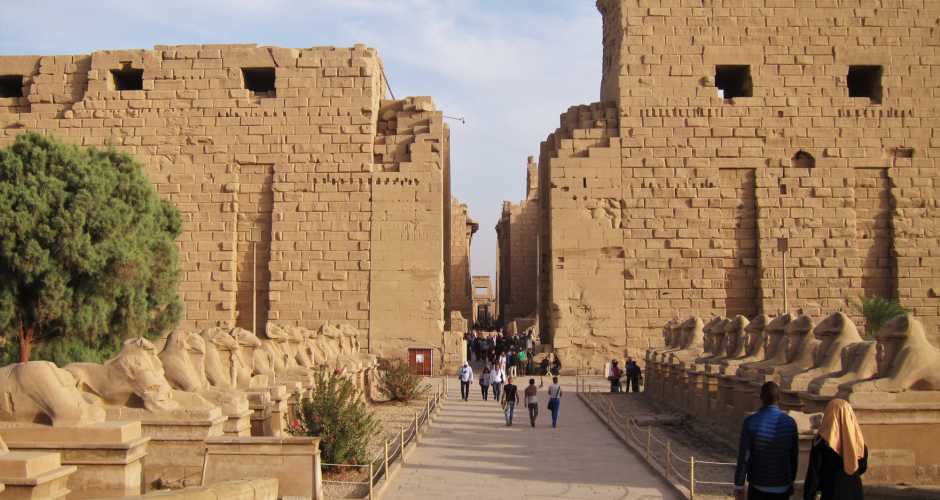 An avenue of ram-headed Sphinxes leads to the first pylon. Ram head symbolizing to god Amun, there are 20 rams on each side, it was built to protect the temple. The first Pylon is the main entrance to the temple and last building at Karnak. flanked on both sides by ram-headed sphinxes. These once ran all the way to Karnak from Luxor Temple (in downtown modern Luxor). During the Ancient Egyptian annual Festival of Opet, the statues of Amun, Mut, and Khonsu were paraded out of Karnak, down this avenue to Luxor Temple.

The gigantic First Pylon, built in the time of the Ethiopian kings, is 113 meters wide with walls 15 meters thick and still stands 43.5 meters high. It was left unfinished, and fragments of the scaffolding of sun-dried brick used during its construction are still visible.

The rectangular terrace in front of the Pylon was subject to flooding in ancient times, as it shows by the marks on its front recording the heights reached by the inundation under the 21st-26th Dynasties. Also look high up on the right-hand side of the doorway to see an inscription recording the latitude and longitude of the principal Egyptian temples as established by the French savants who accompanied Napoleon's expedition to Egypt in 1799, and opposite this, on the left-hand side, is an inscription by an Italian learned society recording the magnetic deviation (10° 56") as calculated by them in 1841.

Beyond the Pylon, you come to the Great Court, which dates from the 22nd Dynasty. It is 103 meters wide by 84 meters deep with colonnades on both sides. The south colonnade is interrupted by the front part of Ramses III's temple.

In the north corner of the court is the small Temple of Seti II, which consists of three chapels dedicated respectively (from left to right) to Mut, Amun, and Khons, each with niches for the image of the deity.

The two pedestals in the middle of the court (only the base of the right hand one being preserved) were intended for statues. Beyond them is the Kiosk of Taharqa. Of its original 10 columns, one, on the right, has survived complete with its open capital and abacus; the five on the left have been reconstructed. The kiosk had doorways on all four sides; in front of the west door, to the right, is a recumbent sphinx. On the right hand column (restored 1927), the name of Psammetichus has been placed over that of the Ethiopian ruler Taharqa (25th Dynasty). Adjoining it is the name of Ptolemy IV Philopator, which also appears on the abacus

The massive temple complex of Karnak was the principal religious center of the god Amun-Re in Thebes during the New Kingdom (which lasted from 1550 until 1070 B.C.E.). The complex remains one of the largest religious complexes in the world. However, Karnak was not just one temple dedicated to one god—it held not only the main precinct to the god Amun-Re—but also the precincts of the gods Mut and Montu. Compared to other temple compounds that survive from ancient Egypt, Karnak is in a poor state of preservation but it still gives scholars a wealth of information about Egyptian religion and art.

North from the Main Temple of Amun Known as the Karnak Open-Air Museum, this collection of shrines lies directly north of the Temple of Amun's Great Court.

Ramesses III (1184–1153 BC) built a bark shrine south of the second pylon, which was later enclosed by the court yard constructed by Shoshenq I (943-922 BC). The shrine’s entrance was fronted by a small pylon adorned with scenes of the king smiting his enemies and two six meter statues carved from red sandstone flanked the door way.

The Second Pylon, built by Ramses II, is badly dilapidated. The towers have been freed from the ruins of later buildings erected in front of them using stone of the Amarna period. In the center is the huge doorway, formerly preceded by a kind of small vestibule flanked by two statues of Ramses II: one of these (on the right) still stands, of the other, only the legs are left.

In the doorway, which bears the cartouches of Ramses I, Seti I, and Ramses II, an intervening door was built by Ptolemy VI Philometor and Ptolemy IX Euergetes II during their joint reign; the lintel of this is missing, but the jambs remain, with reliefs showing the King making offerings to the gods of the temple. The inner side of the earlier doorway has reliefs of the Ptolemaic period with the same scenes on both sides.

The Great Hypostyle Hall is the most amazing building at Karnak. It 103 m in length and 52m in width, it consists of 134 gigantic stone columns, there are largest 12 columns are 24m in height and 3.5m in diameter, other 122 columns are 12m in height. It built by King Seti who ruled from 1290 to 1279 B.C. The outer walls of northern wing describe Seti’s battle. The south wall inscribed with Ramesses II’s peace treaty with the Hittites.

The roof was supported on 134 columns in 16 rows. The two central rows, which are higher, consist of papyrus columns with open capitals, while the other rows have closed capitals. The roof of the central aisle, 24 meters high, rested on the two central rows of columns and on one of the lower rows on each side, the difference in height being made good by square pillars on top of the lower columns. Between these pillars were windows with stone lattice work (one of which, on the south side, is almost perfectly preserved).

The rear wall of the Great Hypostyle Hall is formed by the Third Pylon, built by Amenophis III. Incorporated in its structure were large blocks decorated with reliefs from 13 earlier temples. On the south tower is a long inscription (top part destroyed) detailing the gifts made by the pharaoh to Amun. On the north tower are the last remnants of a relief depicting a ceremonial voyage on the Nile (the pharaoh on the sacred barque of Amun with another vessel).

The Fourth Pylon, built by Tuthmosis I, is in a ruinous condition. The doorway, according to the relief inscription, was restored by Alexander the Great. Beyond the pylon is a colonnade, also ruined, which originally contained huge statues of Osiris set in niches and two obelisks of Aswan granite erected by Queen Hatshepsut, the tips of which were covered with electrum (an alloy of gold and silver). The right hand (south) obelisk lies broken on the ground, its upper part on a heap of rubble to the right; on the base are long inscriptions celebrating Hatshepsut's power as pharaoh.

The left hand obelisk still stands erect to a height of 29.5 meters and an estimated weight of 323 tons. On each of the four faces is a vertical inscription recording the dedication of the obelisks and the fact that they were constructed in only seven months. On the upper part are reliefs depicting Hatshepsut, Tuthmosis I, and Tuthmosis III making offerings to Amun; the names and figures of Amun were defaced by Amenophis IV but restored by Seti I. Against the wall to the left is a granite statue of Tuthmosis kneeling and holding an altar in front of him.